Russian aggression in the East of Ukraine has been going on for four years already, but despite this, Russia still remains the main trading partner of Ukraine. During the period 2013-2016, the trade turnover between Ukraine and the Russian Federation decreased by 4.4 times. However, in 2017 there was a revival of trade relations: the import of goods from Russia to Ukraine increased by 40%, and exports – by 10%. The same trend continued in the current year. The countries began to renew their existing connections and developed schemes. Ukraine remains dependent on the supply of a number of manufactured goods from Russia – in particular, oil, coal for metallurgy and mineral products.

Trade relations with Russia have deteriorated even before the beginning of the conflict in the east of Ukraine. Moscow launched a campaign of total blocking of Ukrainian goods in July 2013. The Russian authorities have given the task to customs officers to inspect all goods from Ukraine. This led to huge queues at the border and failures in the delivery schedule. And by the end of July 2013, Russians recognized risk operations with approximately 40 major Ukrainian exporters. The Russian government then explained its actions by saying that Ukraine is not part of the Customs Union.

In fact, it was one of the ways to put pressure on Yanukovych, who was just about to sign an association agreement with the EU. In August 2013, after the negotiations, it was possible to agree on the resumption of the export of Ukrainian goods. But in the autumn the blockade In the summer of 2014, Russia banned the import of Ukrainian dairy products, including cheeses. Following the milk, exports of juices, canned food, vegetables, fruits and meat products stopped. Even before the open conflict, Russia sought to oust Ukrainian goods from its market. In general, the policy of import substitution of Ukrainian goods began in 2011.

Starting from 2014, Ukraine has sharply reduced trade with its traditional, largest partner, Russia over the course of three years. Ukraine has adopted two resolutions – the abolition of the Free Trade Zone (FTA) with Russia in the framework of the CIS and the introduction of an embargo on some Russian goods. Russia, in turn, suspended the operation of a treaty in the framework of the CIS on FTA with Ukraine in order to protect its market. In addition, Moscow imposed a duty and a food embargo.

One of the key reasons for the decline in Russian imports was the refusal to purchase gas. Starting from the end of 2015, Ukraine does not buy gas directly from Gazprom. In addition, since 2016, military-technical cooperation between the two countries has practically ceased. From the goods turnover disappeared goods falling under the category of “hidden section”, in which, in particular, products of the defense-industrial complex, technologies and armament are included. As far back as 2014 (when Crimea was already annexed, and fighting was in full swing in the Donbas), this section occupied a solid 20.7% – about 5.7 billion dollars in the structure of trade.

Against the backdrop in trade with Russia, Ukraine has been rapidly developing  its trade with EU countries.However, not all companies were able to successfully reorient sales to other markets. The EU market can not always be an alternative for Russian one. There are several reasons: the high demands on the quality of products and the desire of the EU to buy not so much Ukrainian goods, but raw materials. As a result, even at the end of 2016, Russia remained the main trading partner of Ukraine.

Since 2017, the situation has begun to change and trade relations with Russia have come to life. The resumption of trade between Ukraine and Russia occurred precisely in those areas in which it was traditional. In the first half of 2018, Ukraine almost tripled, as compared to the first half of 2017, exports to Russia of products of animal and vegetable origin and nearly twice the production of light industry (footwear, hats, umbrellas), as well as machinery, equipment, appliances, apparatuses and watches. Also, exports from Ukraine to Russia of ferrous metals and the import of mineral products from Russia to Ukraine grew.

Half of the volume of imports from Russia to Ukraine comes from mineral products, another 22% – for products of the chemical industry. Russia remains the main supplier of energy resources for Ukraine: its share in coal supplies is 66% of the total import, oil products – 37%, yielding only to Belarus, which supplies 40% to Ukraine. However, Belarusian fuel can also be considered Russian because Belarusian refineries are based on Russian raw materials.

One of the reasons that can indirectly explain the growth of commodity turnover is the rise in prices on world markets. It should also be taken into account that the intensification of Ukraine’s trade with Russia occurred against the backdrop of a general increase in foreign trade. In the first half of 2018, total exports and imports in Ukraine increased by 11.2% and 13.5%, respectively.

Exports of Ukrainian goods to Russia became more precise. For example, products such as aluminum oxide and turboprop engines have a high specific weight. At the same time, Ukrainian producers are gradually reducing their dependence on the Russian market and expanding sales geography. In 2017, 44% of exporters working with Russia sent more than half of their products to other countries. In 2012, those were 31%.

For the Ukrainian government it  is also difficult to stop trading with Russian state-owned enterprises, despite the fact that in a number of cases it is about national security. A striking example is the delivery of nuclear fuel by Rosatom State Corporation, which for many years was the monopoly supplier of nuclear fuel for the Ukrainian nuclear power plants built under the USSR. In 2008, they concluded the first contract with Westinghouse. However, today, 9 of the 15 Ukrainian power plants are  provided  with nuclear fuel from Rosatom. Ukraine intends to reduce the use of Russian nuclear fuel in the future. After 2020, more than half of the reactors will be converted to US fuel. There are plans to build a plant for the production of fuel elements in Ukraine

Ukraine will continue to depend on Russia for some commodity positions one of which is coal for metallurgy. Ukraine  can try to buy coal in other countries, but then the issue with transportation will be acute, because ports will not be able to accept the amount of coal that is needed for the normal functioning of our industry. But the main reason is that the best and cheaper coal – grade anthracite – is Russian. But food products Ukraine practically does not import from Russia, giving preference to Poland, China and other countries.

Reducing trade with Russia was not easy for the economies of both countries. But Ukraine suffered more. Russia has continued the policy of import substitution, which started even before the military conflict. Some Ukrainian goods were replaced by domestic producers, some were imported goods. Although certain problems with sanctions on the US and EU remain.

Judging by the dynamics of this process, the development of the situation with bilateral trade is in direct correlation with the intensity of the conflict between the two countries in the Donbass. It was during the acute phase of this conflict that the trade between Russia and Ukraine fell several times. In 2017, the situation was in line with the slow-moving confrontation at the front. And, despite the presence of sanctions, trade links were restored.

Thus, we predict that in the absence of an escalation of the conflict in the Donbas, the trade trends of 2017 -2018 will be relevant for 2019. The volume of imports and further will be substantially higher than exports in Russia. In addition, a reduction in the share of export of transport services should be expected due to the fact that in January 2019 an agreement on transit of gas in the EU between the Russian Federation and Ukraine will end. 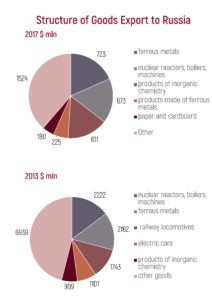 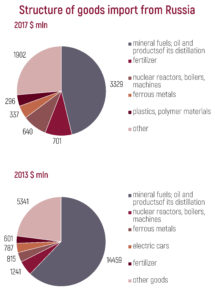 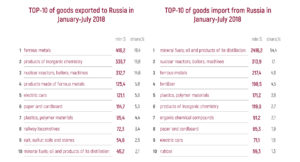