During two months of 2018 the total public and publicly guaranteed debt increased by 0.6%. In 2018, payments are planned for repayment and servicing of public debt equal $10.44 billion. At the same time, it is planned to attract almost $8 billion.

The main risks of implementing the public debt management policy in 2018 are the probability of non-fulfillment of the revenue part of the public budget, possible devaluation of hryvnia and changes in floating interest rates. The rates for planned borrowings are unlikely to be less than 3% (the projected growth rate of the economy in 2018) that will lead to further accumulation of liabilities and growth of the debt burden on economy.

Payments from the State budget for repayment and servicing the public debt in 2018 are planned at the level of $10.44 billion, which is 33.33% of the budget revenues. Payments on external debt amount to $3.84 billion.

The repayments of the public debt in 2018 in the State budget are planned to be almost $6 billion.

Repayments of external debt will amount to $2,105 billion. The large share of them (almost 71%) is the repayment of the debt to the IMF for $1.494 billion.

During 2012-2016, the debt burden on the State Budget of Ukraine has grown more than one and a half times.

In 2017, the ratio of the total public debt to the state budget revenues fell by 13% compared to 2016, mainly due to the increase of budget revenues.

In 2018, the ratio of the total public debt to the budget revenues is expected to decrease as a result of the planned increase in the state budget revenues by almost 16% that is mainly due to the inflationary factor of economic growth.

The dynamics of the ratio of external public debt to exports of goods and services as a source of foreign currency inflow to the country during 2013-2016 is positive.

The decrease in the ratio of external public debt to exports of goods and services in 2017 equals 8.1% due to export growth by 17% compared with 2016.

Structure of the total public and publicly guaranteed debt, in % 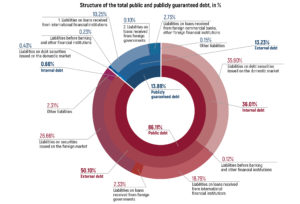