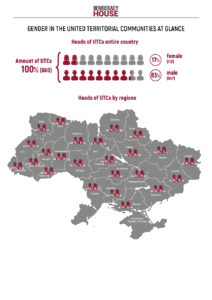 The best regions in terms of representation of women holding leading positions in UTCs are Poltava and Khmelnytskyi regions – 28% each (11 women), Chernihiv region – 27% (10 women) and Sumy region – 24% (7 women).

The most gender-balanced local councils in UTCs are located in the Southeast of Ukraine – Dnipropetrovsk region (50,3% women and 49,7% men), Mykolaiv and Kherson regions – (50% both men and women), Donetsk region (49% women and 51% men). 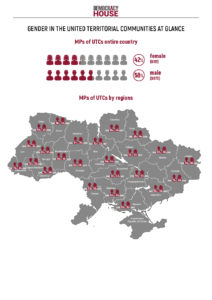 As regards the deputy corps, the number of women in local councils has always been quite high (usually teachers, doctors, social workers, etc. are elected as local deputies).