Self-nominated candidates who went to the election without being bound to the party won local elections in the communities – 67% (447 heads). The second lace was taken by the authority’s party “BPP-Solidarity” – 18% (116 heads). “Batkivshchyna” is at the third place – 6% (38 heads).

The regional project of Oleksandr Gerega (the owner of the hypermarket network “Epicenter”) “For actual actions” in the Khmelnytskyi region showed good results (11 heads), “Our Land” project (10 heads), Agrarian Party (8 heads), UKROP and Opposition block – 7 each. 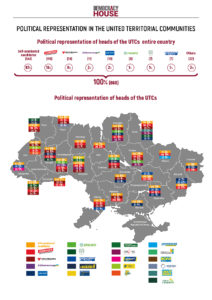 The Agrarian Party attracted the special attention as it showed even results and actively develops its party network. Relatively strong results were demonstrated by regional oligarchic projects – “For actual actions” in the Khmelnytskyi region, “Single Centre” in Zakarpattia, “Cherkashchany” project in Cherkassy region, party “UKROP” in Volyn, “European Strategy” in Vinnytsia etc. 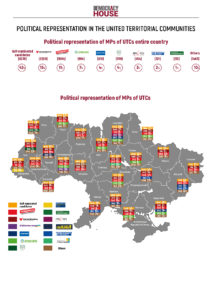 In general, apathy increases at the local level; there is an ideological crisis and disappointment in the reforms. Party building and participation in election campaigns, in most cases, are seen as a tool for earning money, rather than a way of expressing an active position or protecting interests. There is a high level of distrust in political parties in the regions, the membership of which provides the candidates with a toxicity and negative associations with national leaders.

An absolute majority of self-nominated heads and deputies cooperates with the authorities and promises to support them at the next election, although does not hurry to join the “BPP-Solidarity” officially. In fact, President’s Administration does not control local power because local administrations are unbalanced, their machines have lost political and economic influence on the territory, and the prefect institute has not yet been legislated. Now the communities are almost self-sufficient and do not focus on the area or region, and some of the UTCs have already turned into “feudal principalities”.

Representatives of local clans and regional elites have made their conclusions in 2014 and are no longer trying to act openly, show initiative and demonstrate their loyalty to the center. For example, the vast majority of the UTCs’ heads and deputies of local councils in southeastern Ukraine are self-nominated and former members of the Party of Regions. In addition, self-nominated deputies are not reliable partners, and if the political situation changes they can operatively change political camps.

The “Batkivshchyna” party has the strongest party and staffing network in all regions of Ukraine, and therefore showed good results in the UTCs’ elections. In fact, this oppositional force is the main electoral opponent of the party of authorities.