Presidential elections 2019 are crucial for Oleg Lyashko and his sponsor Rinat Akhmetov. If Lyashko overcomes the 5% barrier and gets into the top five of the race, it will open up new financial and political opportunities for the Radical Party. No matter who wins the presidential and parliamentary elections, Oleg Lyashko will be a golden share for the future coalition. Rinat Akhmetov will use the Radical Party to negotiate with the new President on the parameters of cooperation. There is a high probability, that Lyashko will be one of the main contenders for the position of the speaker of the new Parliament in 2019. If Lyashko fails the presidential election, it will worsen his starting position before the parliamentary campaign and may lead to a reduction in funding and political devaluation.

Political career of Oleg Lyashko is probably one of the most interesting careers in modern Ukraine.

Oleg Lyashko had a difficult childhood. He grew up in orphanage without parents. In the 1990s, Lyashko was thrice convicted and sentenced for embezzlement of state property, fraud and defamation. Lyashko also appeared in a few high-profile processes on corruption of minors. In the early 2000s, Oleg Lyashko managed to close all cases and put an end to the convictions with the help of the high patrons who promoted him to the service.

For the first time, Oleg Lyashko was elected as an MP from the “Batkivshchyna” party in 2006 and was reelected in 2007. After the imprisonment of Yulia Tymoshenko in 2010, Lyashko expected to head the party “Batkivshchyna”. However, due to a conflict with Arseniy Yatsenyuk and Oleksandr Turchynov, Lyashko left the party with a scandal.

A loud scandal around Lyashko’s homosexual ties in 2010 became the turning point in his life. It was the time when he started his personal political path under the brand of the main radical of Ukraine. Back then, head of the Yanukovych administration, Sergiy Lyovochkin, began financing Oleg Lyashko’s radical party as a spoiler project against the United Opposition. In the 2012 parliamentary elections, Oleg Lyashko won in the majority constituency in Chernihiv region.

During 2011-2013, Lyashko turned into the most recognizable and shocking politician with hayforks, who brought cows and sheep to the government building, ate soil, misbehaved with small officials and conflicted in the regions with patrol police, judges and prosecutors. Lyashko actively covered his own political tricks (for example, fake interrogations of captive separatists in 2014 near Mariupol) in biased media materials. Currently, Lyashko is considered a leader among politicians in spending money on paid journalism.

In the middle of 2013, Oleg Lyashko began to swiftly approach with Rinat Akhmetov. During Euromaidan in 2013-2014, Lyashko actively self-promoted on barricades. At that time, Lyashko was not perceived by politicians and society seriously. During the early presidential elections in 2014, Lyashko suddenly gained 8% and took the third place. In the autumn of 2014, despite the media conflict with Igor Kolomoiskyi, Oleg Lyashko entered to the Parliament with almost the same result and formed a faction of the Radical Party.

Now, Oleg Lyashko is considered a corrupt politician #1 in the parliament, who co-operated with both the President’s team and his opponents on financial terms. The oligarch-fugitive Oleksandr Onyshchenko described a political portrait and covetousness of Lyashko very well in his book “Petro the Fifth”. Significantly, Oleg Lyashko is almost the only Ukrainian politician who has the annulled visa to the United States. Lyashko was particularly active in lobbying for bills aimed at protecting Akhmetov’s interests (for example, reduction of rental rates for iron ore mining, subsidies for DTEK’s mines and energy facilities, against the introduction of the martial law and the blockade of Azov, etc.).

The politician has an unlimited access to the media of Akhmetov and freely campaigns at the enterprises of the “Metinvest” and “DTEK” group. In general, it seems that Akhmetov supports Lyashko even more than he supports Oleksandr Vilkul. The RPL executive committee and Lyashko’s election headquarters is headed by Akhmetov’s manager – Yuriy Zinchenko. In general, many functionaries who represented the Akhmetov’s wing in the Party of Regions and Opposition Bloc ended up in the Radical Party. The team of Lyashko consists of populists, athletes, combatants and very few professionals (among them we single out only an economist, MP Viktor Galasyuk). Trustees of Lyashko are MPs Andriy Lozovyi and Igor Mosiychuk, who are considered the controllers of illegal amber business in the North of Ukraine. In general, we can say that the Radical Party is a leader-type project that suppresses any initiative and leadership and welcomes the Lyashko cult.

For a long time, Lyashko tried to position himself as a “Ukrainian Duce”, a strong leader, and the leader of the nation. However, the embarrassing jokes of politicians and society, repeated media inquiries into the gay-orientation of Lyashko destroyed this positioning. Akhmetov’s technologists even forced Oleg Lyashko to fictitiously get married to position the politician as a family person with traditional values. Lyashko accompanied by a fictitious wife Rosita and a foster daughter constantly appears in social networks and on Akhmetov’s channels.

The strategic goal of the leader of the Radical Party is to overcome the 5% barrier and be in the top five leaders of the presidential race. The program for Lyashko for the election is simple – for everything good, against everything bad. He does as more regional trips to UTCs, provocative actions, outdoor advertising and direct broadcasting, as possible.

The main tasks of Oleg Lyashko are strengthening his own positions in the South and East of Ukraine with the help of Akhmetov’s production facilities, criticism of the pro-Russian candidate Yuriy Boyko, and the blurring of Yulia Tymoshenko’s electorate in the North, Center and West of Ukraine. In addition, one of Lyashko’s functions is to create a systemic opposition to Petro Poroshenko. According to the ideas of the technologists of Presidential Administration, in 2017-2018 Lyashko had to play the role of the main opponent of the President. However, during two years, Tymoshenko’s ratings grew, Poroshenko’s ratings have fallen, and Lyashko’s ratings remained unchanged at the level of 7-8%.

However, Lyashko has a strong rival, Volodymyr Zelenskyi, who also has a provocative character, and for whom voters may vote “just for fun”.

If Lyashko fails the presidential election, it will worsen his starting position before the parliamentary campaign and may lead to a reduction in funding and political devaluation. 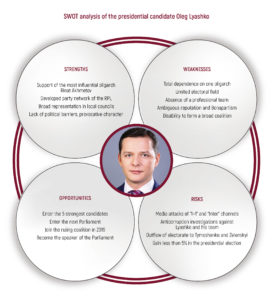