At the end of October, during his concert, Volodymyr Zelenskyi publicly announced his intentions to participate in the presidential election. The statement was made in the traditional humorous format; however, it was taken seriously in political circles and is considered the unofficial start of the “Servant of the People” project campaign. Volodymyr Zelenskyi is the darkest horse and the biggest electoral threat for the distinct liberal triumvirate “Grytsenko-Vakarchuk-Sadovyi”, the Opposition Bloc and the current president of Petro Poroshenko.

The hands of Volodymyr Zelenskyi are played by the influential oligarch Igor Kolomoiskyi, who currently gives the comedian access button to the “1+1” channel. In the long run, he may also open access to unlimited financial resources and the “UKROP” party infrastructure. Kolomoiskyi has long-time corporate disagreements with both Petro Poroshenko and the sworn enemy Viktor Pinchuk who actively promotes Svyatoslav Vakarchuk and the “New Leaders” project in big policy. Therefore, participation of Volodymyr Zelenskyi in the presidential campaign is one of the forms of continuation of the oligarchic struggle between Kolomoiskyi on the one hand, and Pinchuk and Poroshenko on the other.

Volodymyr Zelenskyi has decided to nominate his candidacy for the presidential election, and his team is now actively working on developing an election strategy. According to available information, Zelenskyi plans to campaign unconventionally, in the format of political trolling over opponents, and rely on the humorous show “Servant of the People”. Zelenskyi will bet on a comfortable work in the media space and on TV screens, rather than on fieldwork, which depletes and takes a lot of financial and time resources. At the moment, many Kyiv political technologists are offering Zelenskyi their services on political consulting and election campaigning. Some consultants are even ready to work for free for the sake of interesting experience and further political perspectives within the framework of the “Servant of the People” project.

However, Zelenskyi and his team of “95 quarter” are self-sufficient in terms of political creativity, and therefore at this moment, they refuse expensive consultant services. In the same time, Zelenskyi’s environment notes that in 2019, they will need organizational assistance in building up the regional network of campaigners and observers. On the other hand, Zelenskyi may also count on the party infrastructure of the “UKROP” party. At the moment, Andriy Shevchenko, the leader of the “UKROP” party, MP and owner of “Bukovel” resort, conducts party primaries, but his ratings are negligible – about 1-2%. Therefore, “UKROP” project is unprofitable and ineffective for Kolomoiskyi.

Volodymyr Zelenskyi is supported by the protest electorate that does not trust the old elites and has high demands for the emergence of new faces in politics. The electoral core of Zelenskyi consists mainly of young people (18-30 years) and representatives of small and medium business. These are Russian-speaking voters located in large industrial cities of the South and the East, as well as evenly dispersed in the regional centers of Ukraine. Analysis of the electoral portrait of Zelenskyi’s voters shows that there are high risks that young people will not go to elections and that it will be very difficult to mobilize them.

In any case, Zelenskyi’s ratings range from 7% to 10%, which is a rather high result for a candidate who does not have a political infrastructure. Given the active campaign, Zelenskyi can increase his electoral potential, and even take 3rd place. The supporters of Zelenskyi flow and intersect with the liberal candidates of “Grytsenko-Sadovyi-Vakarchuk”, the Opposition bloc and Petro Poroshenko. Zelenskyi’s urban electorate almost does not intersect with village and town electorate Yuliia Tymoshenko. Thus, on the one hand, Zelenskyi will fight for the liberal and Russian-speaking voter, and on the other – compete with the President for the patriotic voter being the main audience of the “1+1” TV channel. At the moment, Zelenskyi’s participation in the presidential election is the highest risk for Petro Poroshenko.

Of course, the main task of the “Servant of the People”, as well as for all political stakeholders, is participation in the 2019 parliamentary elections.

Despite all attempts to distance himself from the oligarch, Volodymyr Zelenskyi is considered a trump card of Igor Kolomoiskyi who hopes to resume his political and economic influence in Ukraine. Using the help of Zelenskyi, Kolomoiskyi may strike at the old enemies – Viktor Pinchuk and Petro Poroshenko. In this context, Zelenskyi demonstrates the political trolling in respect of Pinchuk’s creature – Svyatoslav Vakarchuk who is also a showman and claims to his unique electoral niche.

According to available information, the Minister of Internal Affairs Arsen Avakov who is also interested in preserving political influence shows political interest in the “Servant of the People” Project. Hence, the Minister Avakov in the long run can finance the Kolomoiskyi’ project and delegate his people to the electoral list in 2019.

As the official campaign commences on January 1, interest in Zelenskyi and the “Servant of the People” project will only grow.

In addition, in order to intervene in serious political competition, as well as defend the results at the polling stations, Zelenskyi and his party need to move from television studio and facebook to the fieldwork. They need to attract new leaders, activists, build a real party, rather than a regular media project for specific elections and the tasks of sponsors and oligarchs. However, unfortunately, the analysis of facts and trends demonstrates that another virtual leader-type virtual party is being built around Zelenskyi. With the help of mass media and finance, and the charisma of its leader, it will be able to play on excessive public expectations. 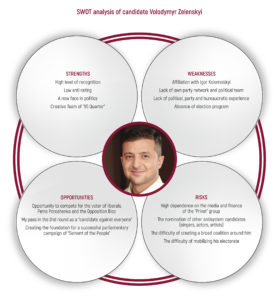